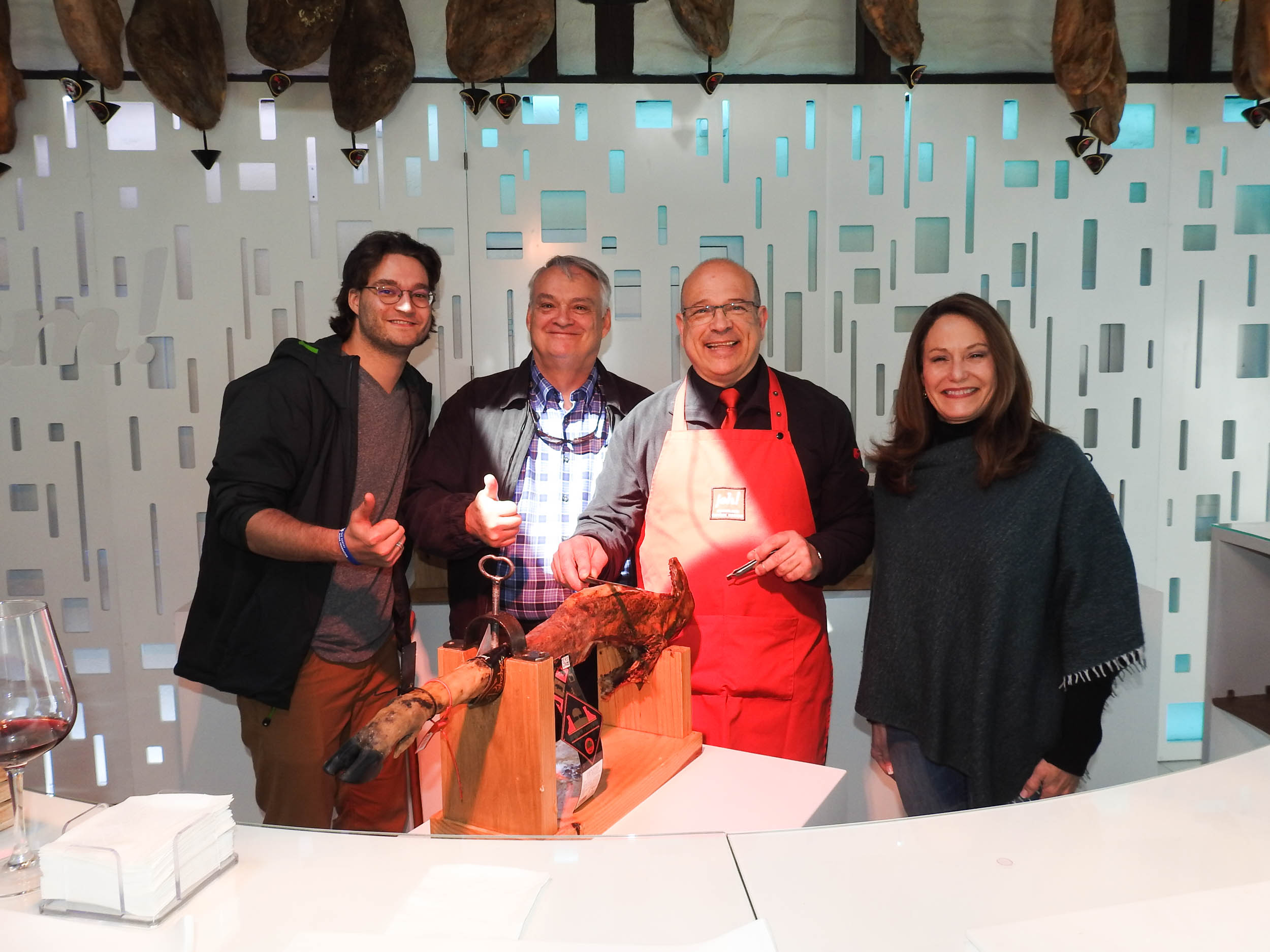 A deluxe hunting trip in Spain is the absolute best combination of great hunting, amazing tourism, spectacular cuisine, best hotels, exclusive service and, what is more, getting to know in depth the peculiarities of our intense country, with emotional and breathtaking personal experiences that engender an unbreakable bond between Spain and you.  Hunting in Spain is a lot more than just hunting, and every hunting trip becomes a hunting holiday. In this article we are going to talk about the best of the best for a one week deluxe hunting trip in Spain.

In March this year we have had the opportunity of offering one of the most luxurious and deluxe hunting trip in Spain, combining the best of the hunting service with the best of the deluxe touring service: 5 star hotels, absolutely the best restaurants in the area with 1 and 2 Michelin stars, visits to wine cellars, horse back riding, spas and cathedrals and castles visits. 7 days that resulted in a top notch, deluxe hunting trip in Spain. 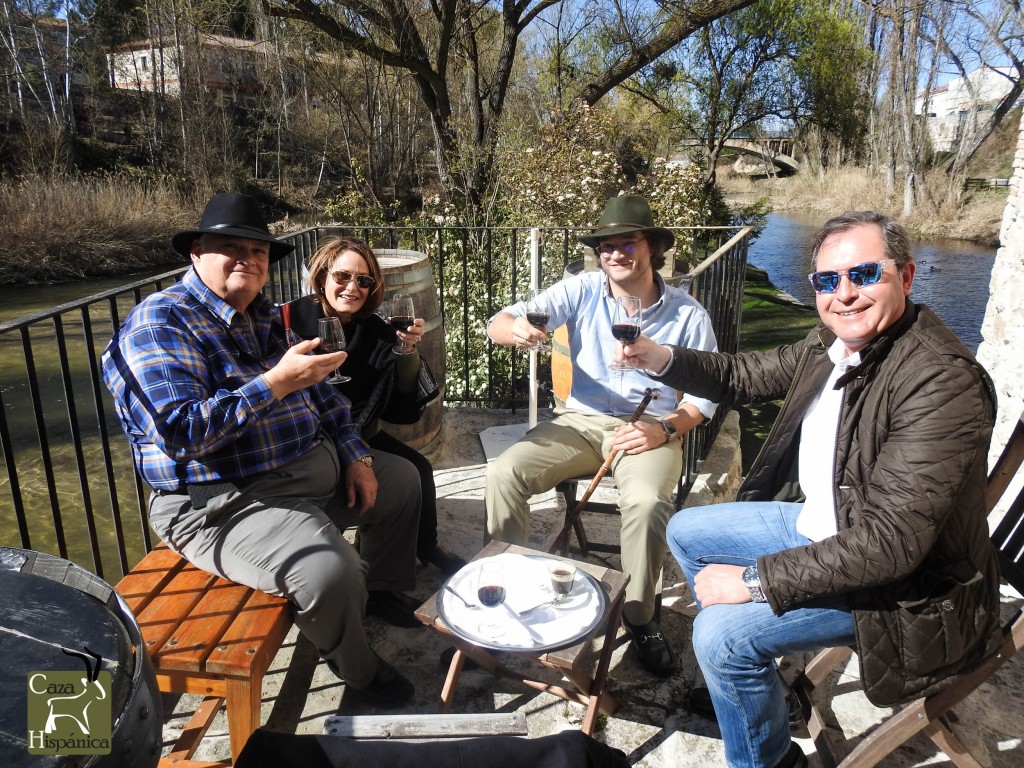 The itinerary of a deluxe hunting trip in Spain

On the first day we welcomed Bill, Gay and Richard Scott at the airport in Madrid. We cleared the gun and then started our drive towards Cáceres. At noon we stopped in Trujillo, the city of the Conquistadors (Conqueror). Two of the most famous conquerors were from this town: Francisco Pizzaro, the conqueror of Peru and Francisco de Orellana, the discoverer of the Amazon river. We could admire Pizzaro’s statue in the main square of the center of the town: 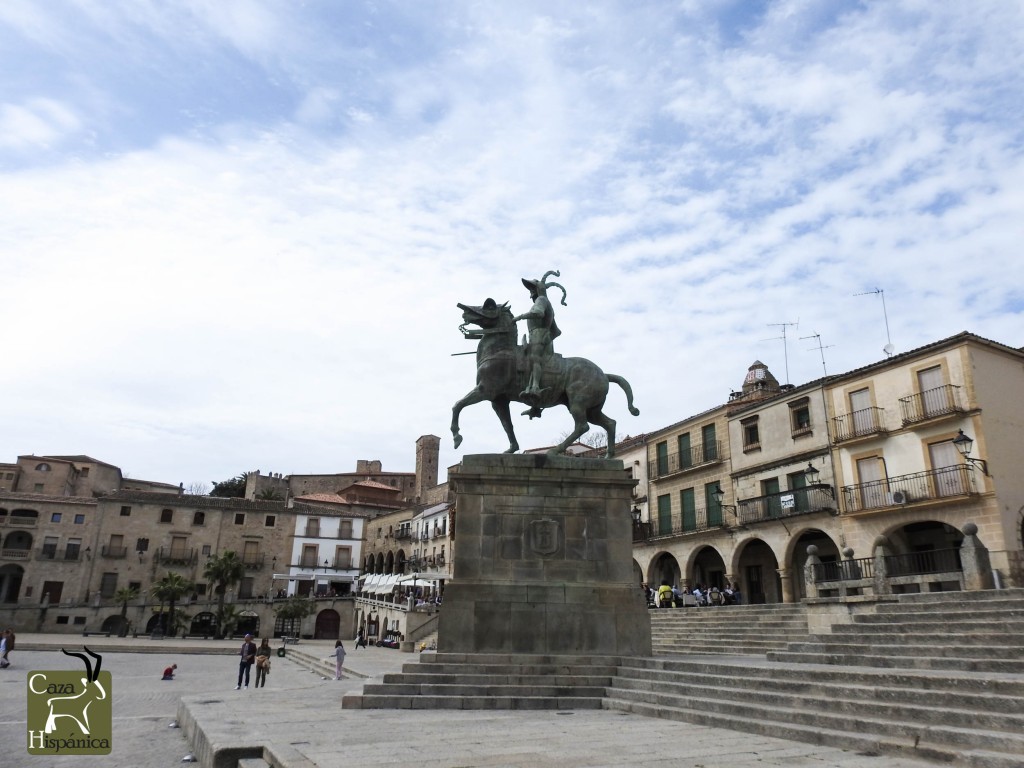 After lunch we continued our drive towards Cáceres. Founded by the Romans in the year 25 BC, Cáceres is a unique city in Spain. It was also declared a World Heritage City in 1986 because of the city’s blend of medieval, Roman, Moorish, Northern Gothic and Italian Renaissance architecture. Thirty towers from the Islamic period still stand in Cáceres, of which the Torre del Bujaco is the most famous. In this city our clients stayed at one of the most prestigious hotels, Atrio, where we enjoyed an exclusive 2 Michelin star dinner with the finest wine pairing one can imagine.

We started our second day with a lovely time attending mass at the St Mary cathedral. We had lunch in one of the finest restaurants of the City, El Figón de Eustaquio. 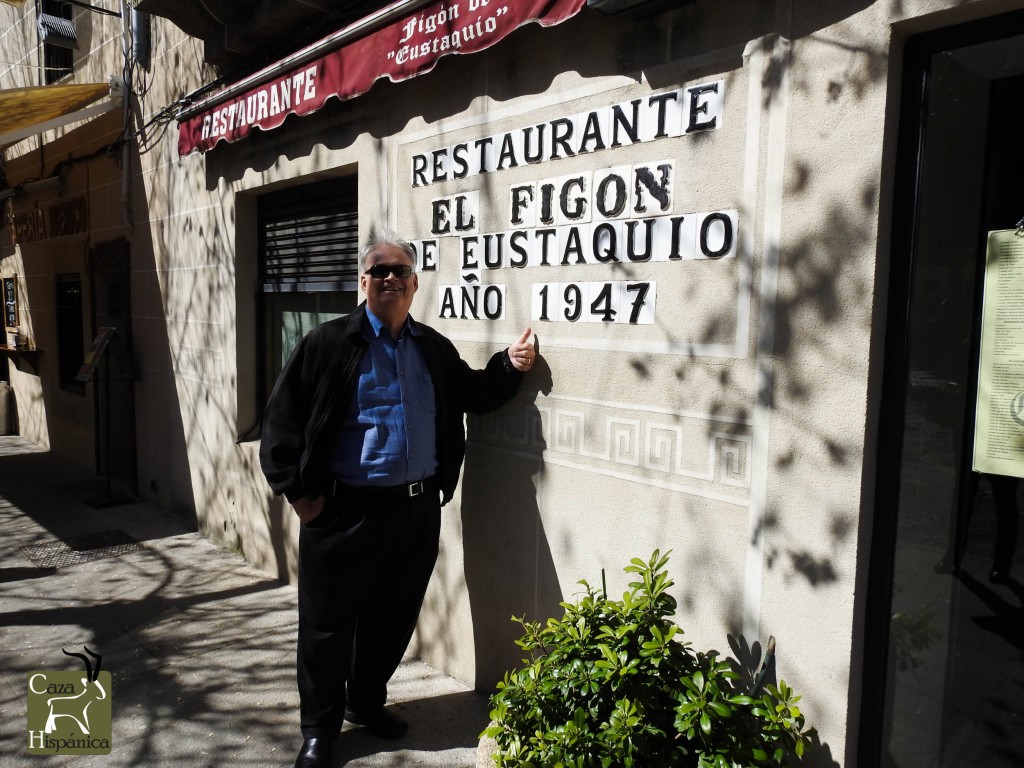 In the afternoon we drove towards the hunting area of the Gredos Ibex, admiring the picturesque sites of the mountains on the way. We had dinner in the village La Alberca, one of our favorite places where they serve what for many of their clients is the best ox tail in Spain.

Getting up very early in the morning we managed to be on the mountain before 8 am. Richard sighted in his gun and we started the hunt. The guides had been in charge of the pre-scouting so they had several groups of ibex located. In the morning we got very close to a group of ibex in the thick bushes of the Northern side of the mountains and after spotting them for a couple of seconds they were impossible to see from any angle of the mountain or from down in the valley. After moving around a little longer we could see that all the ibex that we were seeing were bedded down so for at least a couple of hours they would have a nap and not be moving around. This is when we took our lunch break.

Two ours later we were back on the mountain. After a few minutes of driving we spotted from far away a dark immense Gredos Ibex in the distance. It would have been impossible to shoot from there so we had to figure out some options to get closer without being noticed. We got in the car and drove to the other side of the slope. Richard, Vicente and one guide were the only ones that were going to stalk this ibex as it was crucial that they were not seen. After less than half an hour everyone could hear a shot not very far away between the trees and the Super Gold 13 years old male was on the ground. 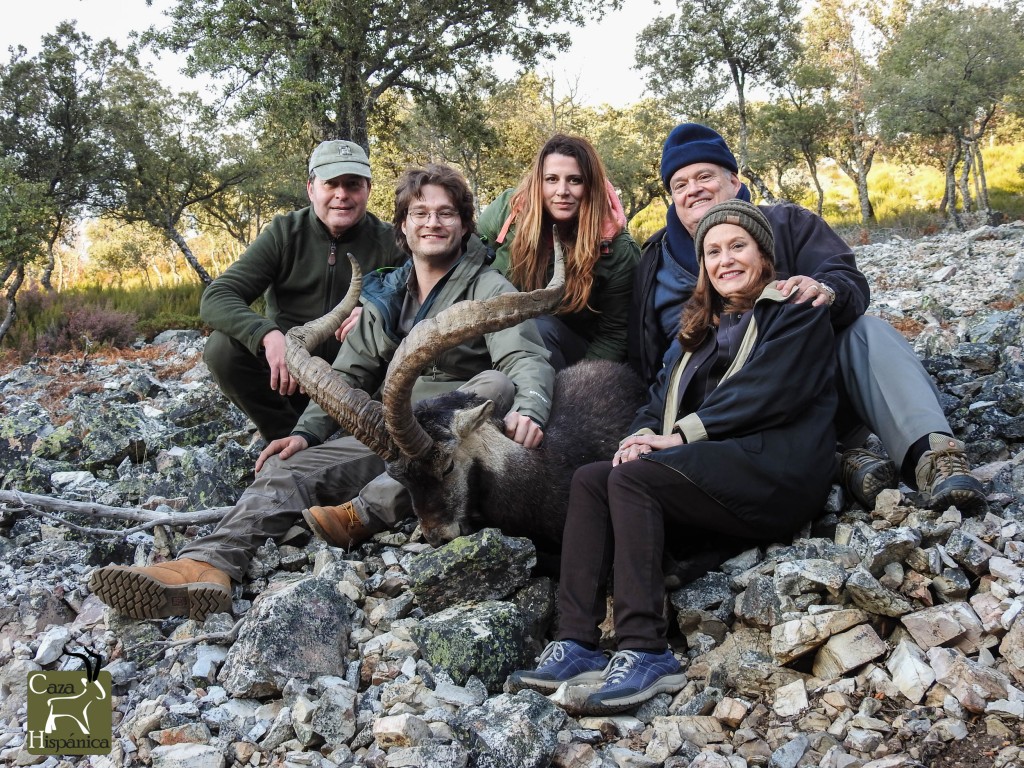 The rest of the day has been a complete feast. Everybody was amazed by the huge trophy Richard had gotten. Over 260 CIC points, that is one of the, if not the biggest Super gold Gredos Ibex hunted this year in this Game Reserve.

On the 4th day of this deluxe hunting trip in Spain we had one of the most impressive experiences. We visited the Acorn Spanish Ham Museum. After a great video presentation and an explanation of the curing process, we had our guide, Virgilio, explaining all the production aspects and stages of the ham, starting with the species of pigs, feeding type and regulations, and ending with a delicious tasting of 6 different types of hams, 5 of them of acorn fed pork. 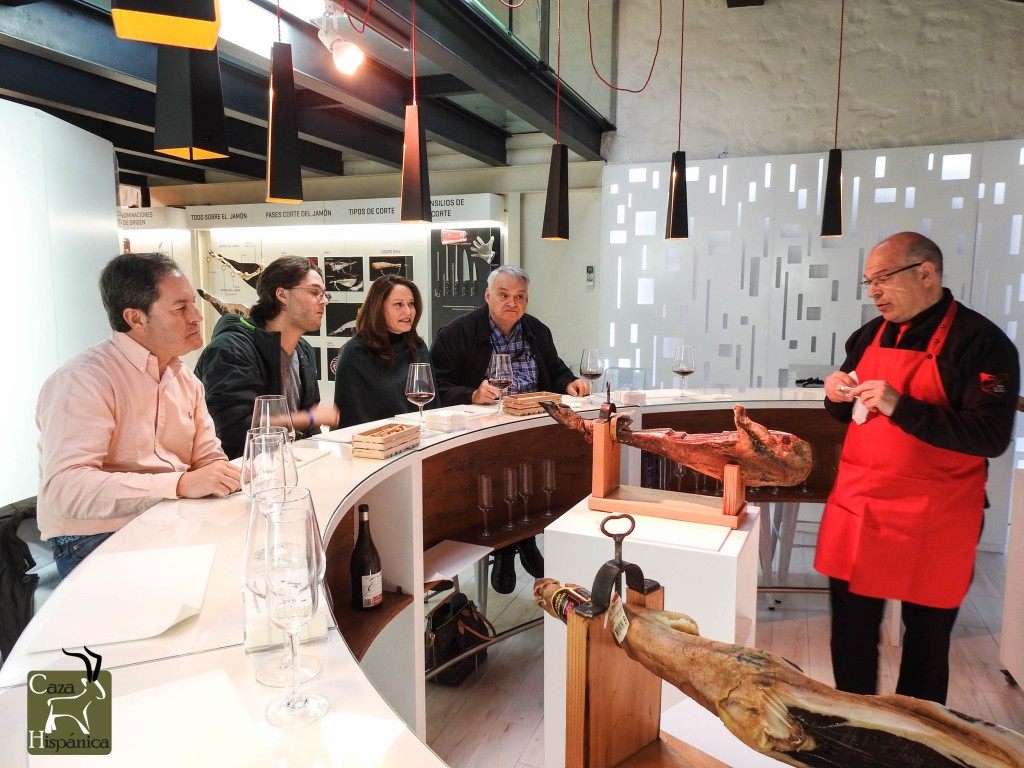 In the afternoon we bought some local products, goods and gifts for the ones at home.

What is a Deluxe hunting trip in Spain without a special chapter dedicated to the Spanish wine? On our fifth day we drove towards the “Wine Country”, the area named “Ribera del Duero” where some of the most prestigious wines in Spain are made. Our clients stayed at Abadía Retuerta, Le Domaine, 5 star hotel, with one of the two restaurants having 1 Michelin star award. The hotel itself is a treat. Having been an authentic abbey half a century ago, it is one of those places that make you go back in time and imagine everything those walls have seen. Wonderful chambers, a chapel, beautiful hiking paths on which we rode on horseback and an amazingly worldwide famous spa makes everyone feel very well spoiled. 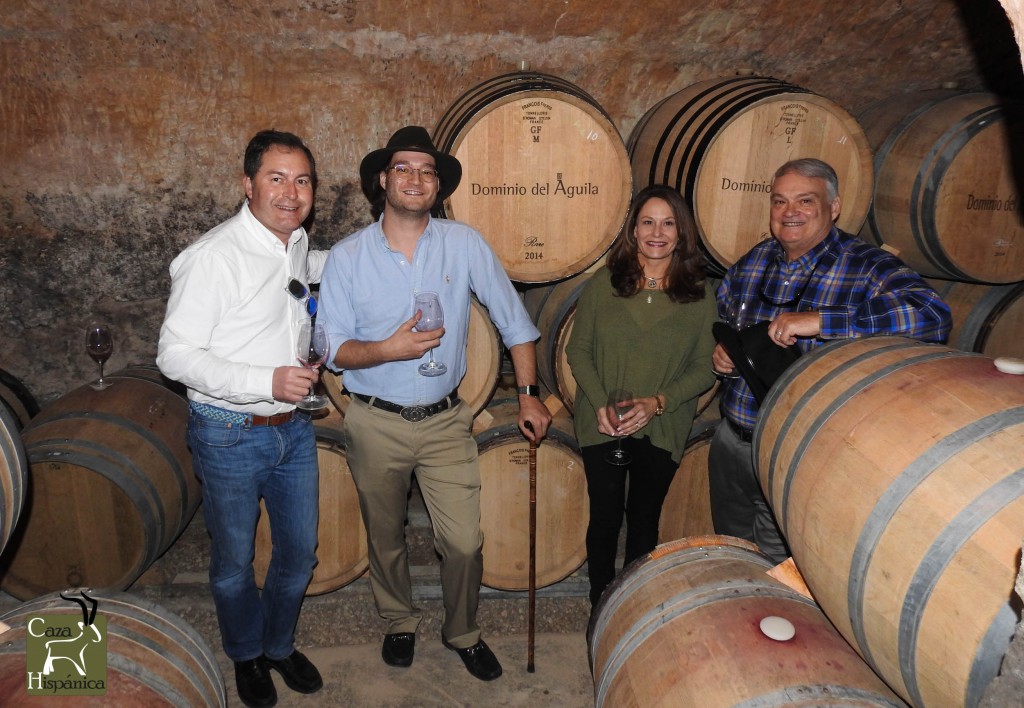 We also went to other restaurants in the area to make sure our clients don’t only try “avant-garde” like dishes, like the ones in the hotel, but also traditional dishes like “cocido” and “pinchos de cordero” (lamb kebabs). In this area there are lots of pine trees that give pine nuts so we couldn´t leave this area before trying a pine nuts cake. Delicious! At restaurant Molino de Palacios we had a delicious oven roasted lamb, one of the typical dishes of the area.

Our last day was spent in Segovia, famous for its 3 landmarks: the Roman aqueduct, the Cathedral and the Alcazar fortress. Lunch was a treat again, as we had lunch in one of the oldest restaurants in the city: Casa Duque. Here we had “cochinillo”, suckling pig. Ms Duque, the restaurant’s maître, and the daughter of the 4th generation of the Duque family since the opening of the restaurant, dedicated the dish to Mrs. Gay Scott, with the traditional speech, breaking the crunchy meat using a dish and then breaking the dish on the ground, in honor to the sacrifice of the pig and for good luck. 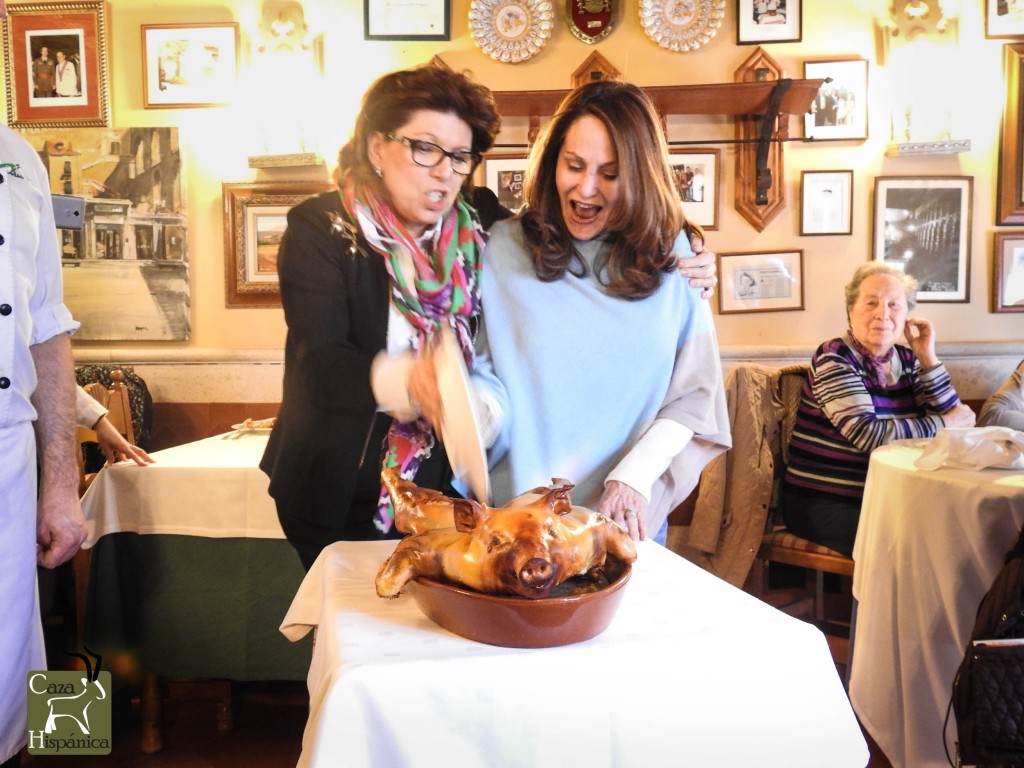 Just before sunset we began our last drive towards Madrid from where Bill, Gay and Richard left in the morning of the 8th day of their deluxe hunting trip in Spain.

Here is a visual summary of the trip: