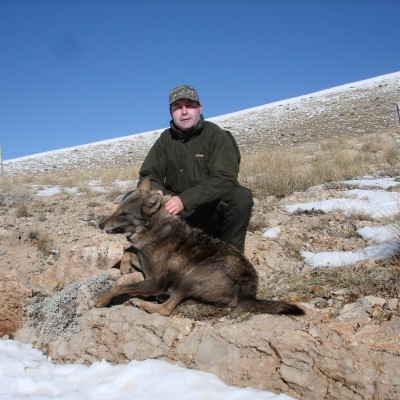 Canis lupus, the Spanish wolf is a gray wolf, the largest wild member of the dog family and is the ancestor of the domestic dog. The skull is especially large, with powerful jaws and large, well-developed, meat-eating teeth. Like most canids, it has 42 teeth. The fur is moderately long and thick. The overall color varies from grayish-brown to yellowish-brown, and there may be a reddish tinge on the head, ears, shoulders and legs.

Hunting the intelligent, wary wolf is difficult, and most are taken by chance encounter. European wolves have a reputation for being more aggressive toward humans than North American wolves.

The hunt of the Spanish wolf in Spain´s territory is a very exclusive hunt. The method is hunting over bait and the shooting distance is 100-150 yards. It can only be hunted north from Madrid and very few tags are available per year. Make sure to book ahead of time if you want to hunt the Spanish Wolf.

Hunting season: from November until February