April is the best month of the year to hunt Beceite Ibex and Roe deer in Spain. The hunting season of the Beceite Ibex begins in November and it lasts until the end of May, but the hunting season for the Roe deer begins at the beginning of April until the end of September. As we already mentioned in one of our articles dedicated exclusively to the hunt of the Roe deer, the animal is not easy to hunt because they are very skittish. The only time of the year they are more vulnerable is during the last 2 weeks of April and the first week in May as they feed outside of the forest in the terraces where the new grains begin to sprout in Spring. Roe deer’s favorite plant is the sainfoin. 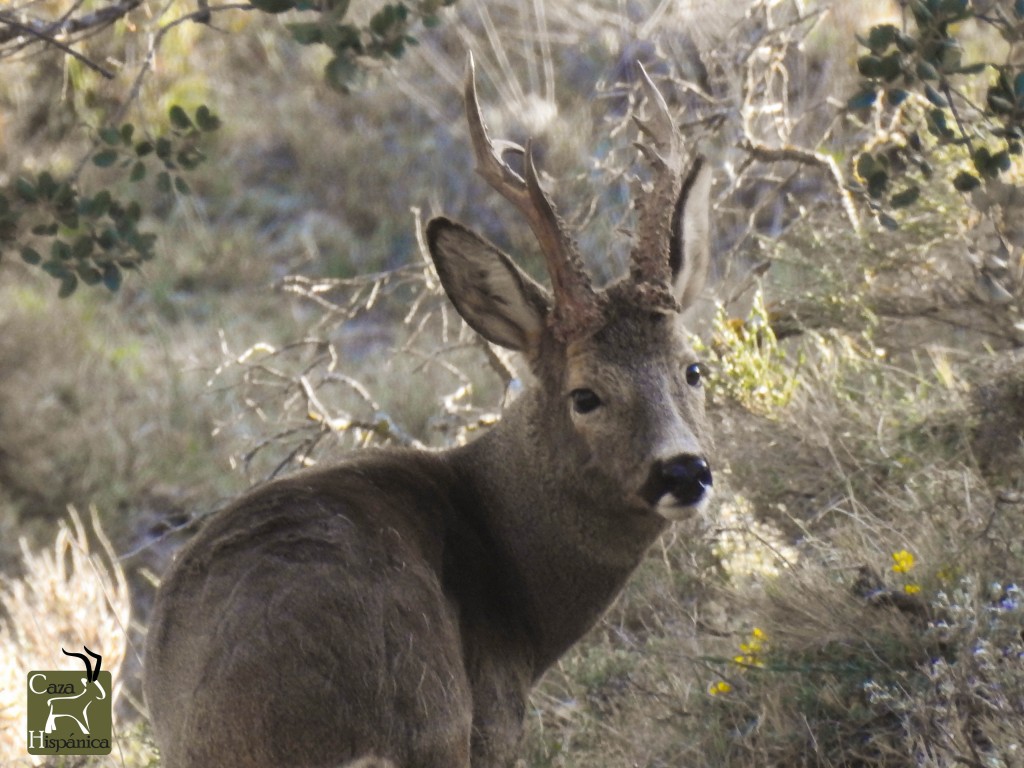 We met Dell in 2016 at one of our shows in the US and this year he decided to come with us for a Beceite Ibex and Roe deer hunt. He spent 4 days with Caza Hispanica and he hunted a Gold Beceite Ibex and a beautiful Roe deer.

Things didn’t look well for Dell at the beginning of the hunt as the weather was really challenging. We had lots of fog and rain, especially during the first 2 days, and we always had some threatening clouds above our heads letting us know we’d better take advantage of any moment of sunshine as that was not supposed to last.

Despite the weather, we managed to see many animals in the free range concession. Some in the distance, others relatively close, but as we tried to get closer, they left without leaving any trace.

In the afternoon of our second hunting day we were lucky enough to get the chance to get Dell close enough to a couple of Beceite Ibex. We say “lucky” because as you can see in the video below we had a couple of young males that spotted us and were about to spook the group from where they were. But we stayed there for a while until they left and fortunately the bigger males disregarded the jumpy smaller ones. You can tell how lucky Dell felt with this ibex in the photo below: 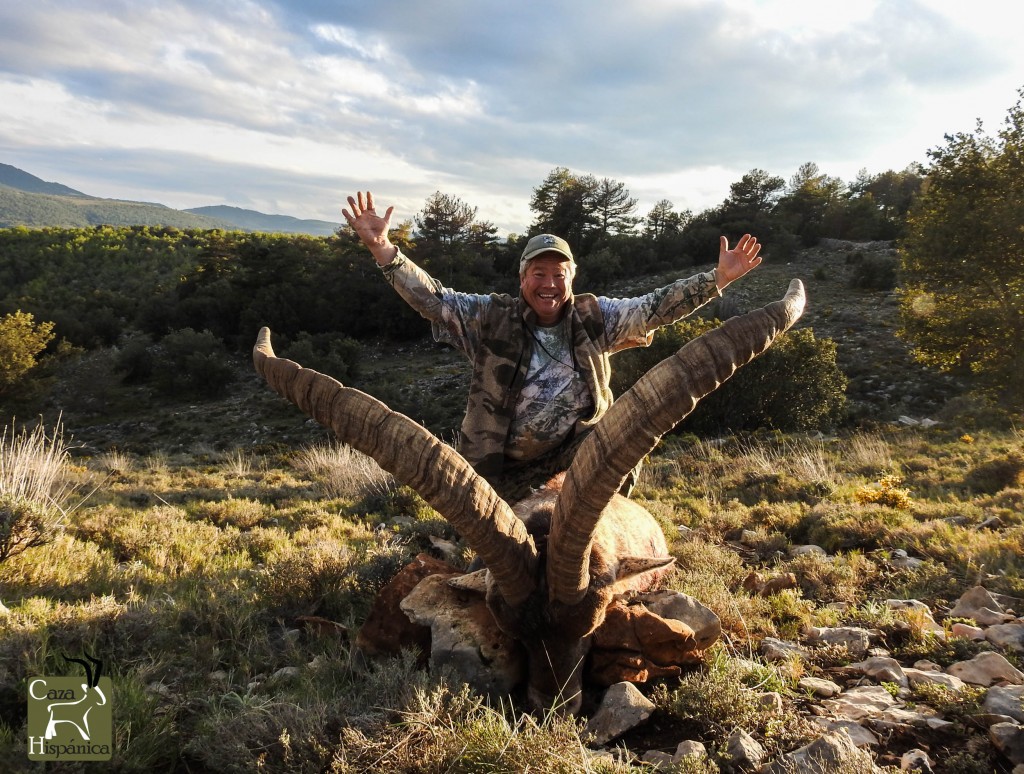 After harvesting the Beceite Ibex, Dell got ready for the hunt of the Roe deer. A significantly different hunting method, as the roe deer is to be hunted very early in the morning or very late in the afternoon. Our morning wake up time was 5:30 and by 6:30 we were already in the field. The temperature was a couple of degrees below freezing point, so the hunt was pretty demanding.

The first morning we saw around 12 roe deer, but in the next afternoon we didn´t see any males, only Vicente spotted in the distance a few females. The next morning was challenging as well as the roe deer seemed to be nowhere to be found. In the afternoon we got lucky again and after spotting the roe deer feeding on a terrace, Vicente and Dell got closer, and although Dell had to struggle against the beams of the sun at sunset that hit straight into his scope, he managed to harvest this beautiful roe deer. 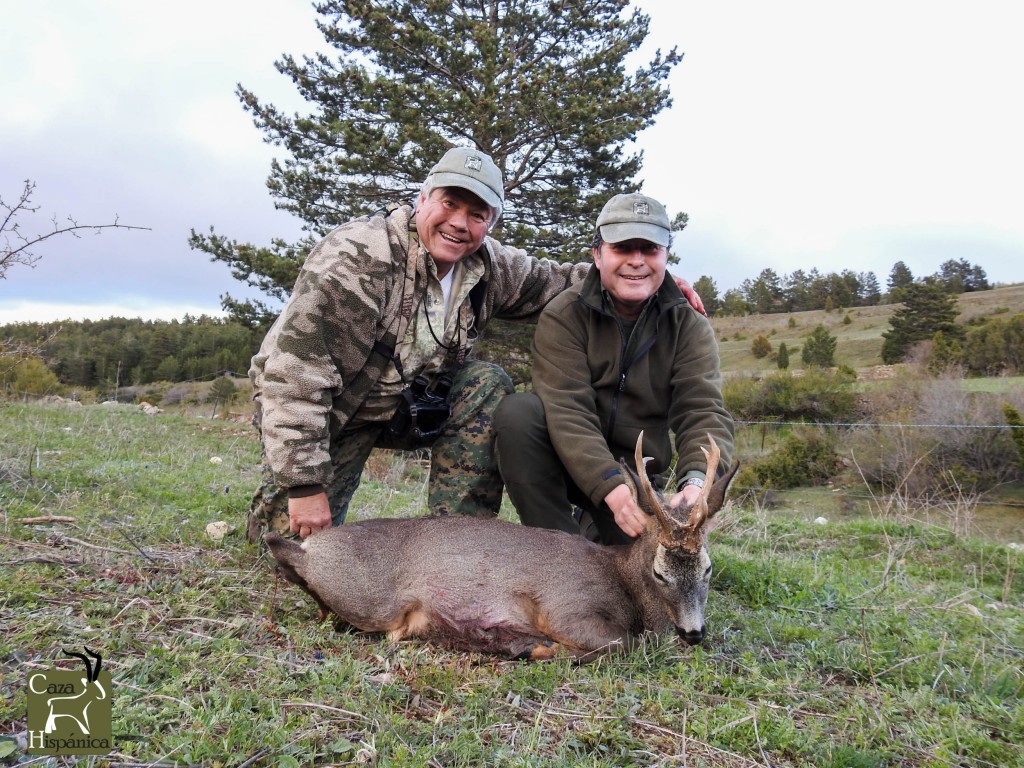 A little on the edge, but it was doable: 4 days, 1 gold Beceite Ibex and one great looking Roe deer. Dell and his wife spent a few more days touring Valencia before flying back to Utah and is already making plans to come back and hunt Gredos in the near future.

Book now your Beceite Ibex and Roe deer hunt for 2018

As you can notice there is only a 3 week window when you can hunt both these species with an almost 100% chances. Make sure to book your spot before it is too late and send us an email at info@cazahispanica.com.