Spain has an abundant hunting heritage and the hunting tradition in Spain can be connected to the most remote first signs of human civilization.

Hunting was one of the first activities of the ancient people that lived on the face of the earth. Using prehistoric weapons, hunting was the main source of food.

In Spain we have found many cave paintings that illustrate the hunt of the Spanish Ibex with ancient bows and spears and people used these earliest tools to harvest animals that would provide meat for nutrition, fur and leather for clothes or blankets. In fact, Caza Hispanica´s logo was inspired in one of these cave paintings. 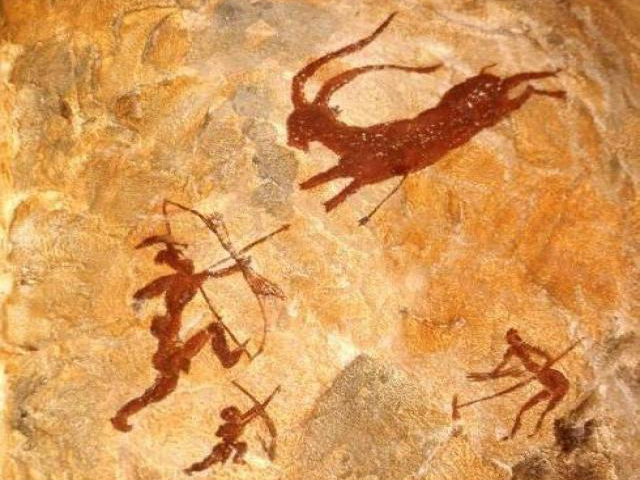 Hunting never ceased being one of the main means of the people to provide food for the entire family. Hunting is in fact the origin of the domestication of animals. Hunters realized that too many times they had to go hunting and maybe come back without any prey, so domesticating these animals would provide food all year round. But hunting never stopped losing its importance. Society had evolved and the only goods that villager could trade were sheep and goat, so selling them was very important in order to assure and maintain the subsistence of the entire family. Therefore, wild animals were then hunted for personal use and the domesticated ones for commercial purposes.

Hunters had become very good at their activity. They grew applying techniques and tricks that they learnt from their grandfathers and fathers.

At this time rulers and nobles started practicing hunting as an outdoor activity. They had hunted since forever; and they kept hunting even when the need of meat and food stopped being so crucial. Hunting became an entertaining activity.

During the Middle age, it has been stated that hunting in Spain had 3 important uses. First and foremost, hunting in Spain had a huge military use. Soldiers would often have to make use of hunted animals while on the move from one territory to another. Secondly, locals would organize hunting parties that had the purpose to harvest predators that were dangerous for people, domestic animals and crops. Thirdly, hunting was still practiced on the Spanish territory by people that lived in the countryside and they would hunt in order to provide food for the entire family and use the skins as leather for clothing and other tools.

But during the medieval times, hunting was already the most favorite distraction of the rulers, royal court and aristocracy, mainly focused on big game animals that they would hunt while riding the horses and using spears as weapons and dogs as helpers. Kings used to go hunting while staying at their country houses where they also set for royal hikes and horse rides. Many of these palaces were located in Aranjuez, south from Madrid, where kings enjoyed their holidays and went hunting. They would get up early in the morning and after taking care of their royal duties they spent the rest of the day hunting wild boar, deer and birds.

Hunting was beginning to be considered a traditional sport, linked to an elevated social and economical status, but the ordinary country man never gave up hunting as a food providing action.

First conservation measures for the hunting tradition in Spain

Royal characters like Felipe V, the first Spanish Bourbon King after taking over the kingdom of Charles of Habsburg, is one of the kings that is famous for his hunting habits. Felipe V would often leave Madrid to spend quality time in the country going hunting and fishing.

The king Alfoso XIII got concerned with the obvious lack of the Spanish ibex in Spain due to intense hunts of the animal. In 1903 he created the first “Coto real”, Royal hunting area, the very first measure against the extinction of a Species in Spain. Nowadays this area is the greatest hunting concession for the Gredos Ibex, concession that Caza Hispanica has access to, whenever our clients hunt the Gredos Ibex.

The modern Spanish hunter respects the inherited culture of its country and takes joy in this activity. He sees the hunting tradition in Spain as a ritual that gets us closer to the deepest laws of the Earth and draws us away from the day-to-day life.