Joe DeNoble crossed the Atlantic to Spain in March with his wife Deanne and mother Barbara to do his Grand Slam with Caza Hispanica. With favorable weather and Joe’s perfect aim, it was the first Grand Slam to be finished within just four hunting days.

Joe’s first game was the representative Gredos Ibex. Shortly after sighting the gun at 200 yards in the Gredos Mountain Range we spotted a numerous herd of Ibex about 400 yards away. With a powerful, cold wind blowing at about five-thousand feet we were lucky to spot two rams separated from the herd, feeding on a lower altitude. We began the stalk, at the beginning continuing with animal paths and then jumping up giant granite boulders. We followed a bigger, brighter ram that way for about twenty minutes up to a spot where Joe could set the gun and get the game standing on the top of a huge rock slab. There was no time to think too much nor make a mistake. The other herd disappeared and the shot was to be fired right away. One of the guides was skeptical about Joe’s shot, and he claimed the ram jumped down the rock and ditched the bullet. Joe, however, conscious of his skills, could see the game dropping down and was sure he got it with just one bullet. Luckily, as we followed the track, we spotted blood drops and only a little further, the trophy was lying still with a bullet low in its lung. 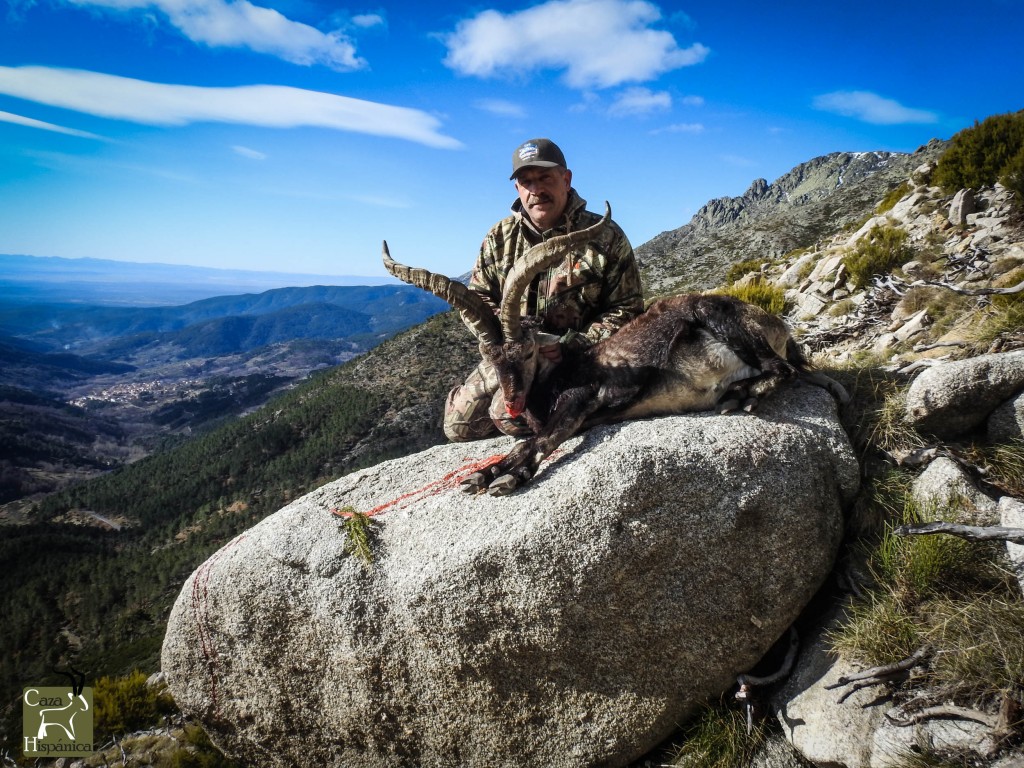 After skinning the game to a full-mount trophy we went to a picturesque, rural town at the feet of the mountain. After the PH and the guides took care of the paperwork, we all celebrated the successful hunt with cold, local beer and tapas. 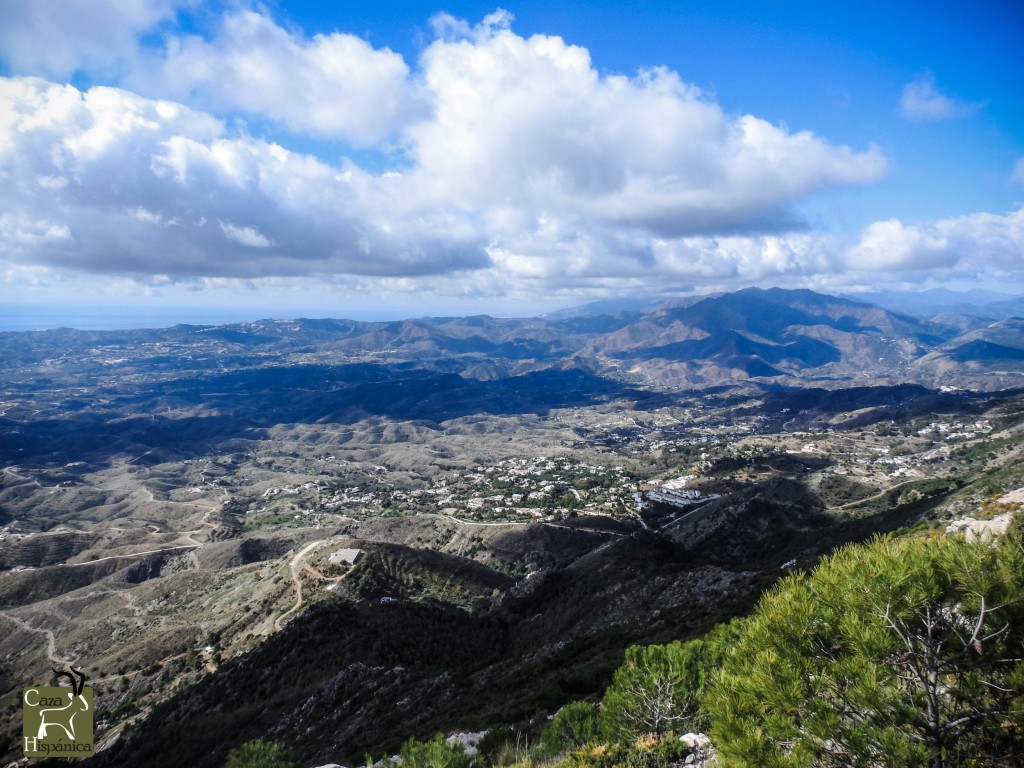 After harvesting the first of the four Ibex it was time to head south to the breathtaking hunting area of Ronda.

After a proper breakfast and a large cup of black coffee we headed with our guides to the mountains overseeing the Mediterranean. Early in the morning the fog was still covering the peak of the mountain and so we were glassing down in search of the rams with no success. When the fog cleared out we decided to go uphill and glass the upper part of the mountain seeing several females with their little ones. It was long after lunch that Joe spotted a herd of males in the area that had burned down a couple of years back, leaving fresh, green vegetation for the Ibex to enjoy. 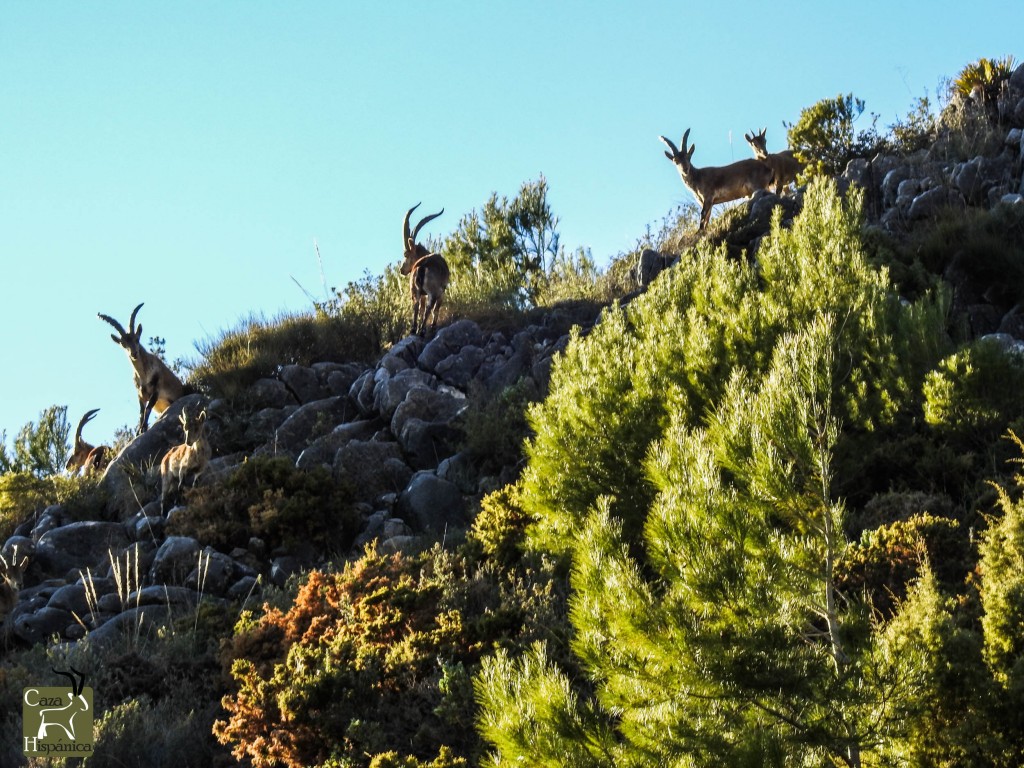 As we glassed the group, we saw the biggest male coming down to a narrow space between two steep slopes. That is when we were forced to change the plan and instead of shooting down from about 200 yards the PH came down to shoot at 80 yards from a standing position. Next thing we knew was the ram rolling down the slope, marking the half-way point of Joe`s Grand Slam. 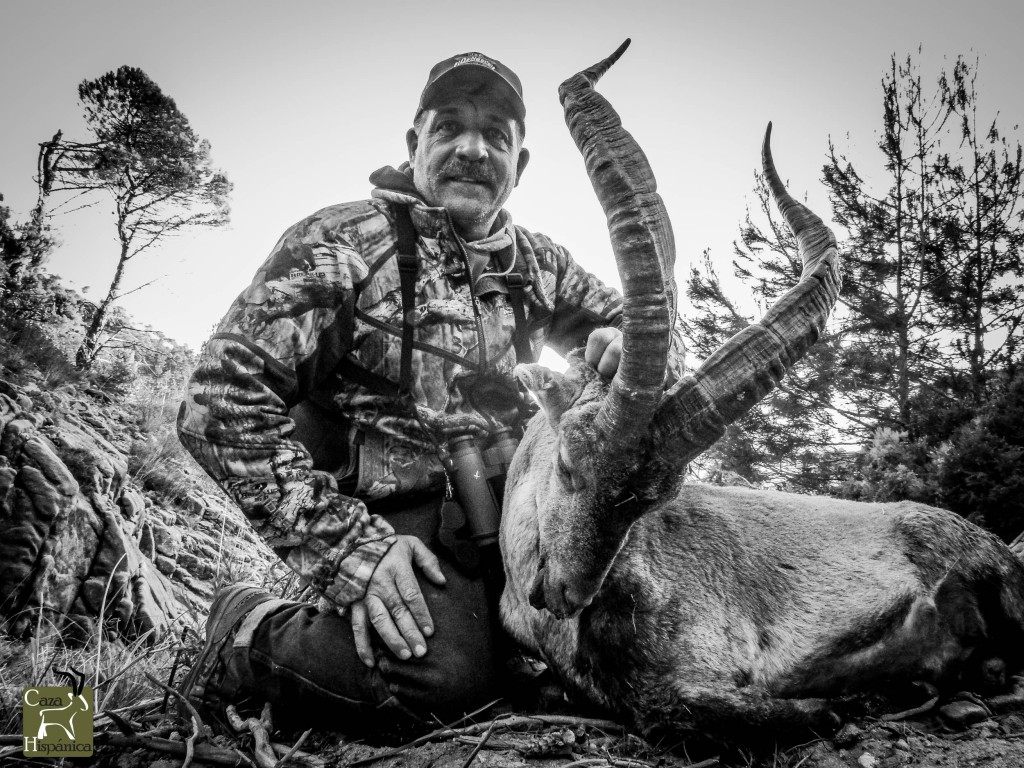 Halfway through Joe´s Grand Slam we headed east to Granada, where we saw a flamenco show and enjoyed spectacular views of Alhambra, the second most visited monument in Spain.

Approaching the Southeastern Ibex hunting zone we saw a ram just next to the asphalt road. Lured by that view we stopped on the opposite side of the mountain, glassing at the slope below the rural road. The guide advised us to be patient and wait for more males to come down to feed in that area. Meanwhile, we had an amazing lunch with cured ham and olives, awaiting the opportunity to shoot the biggest male. 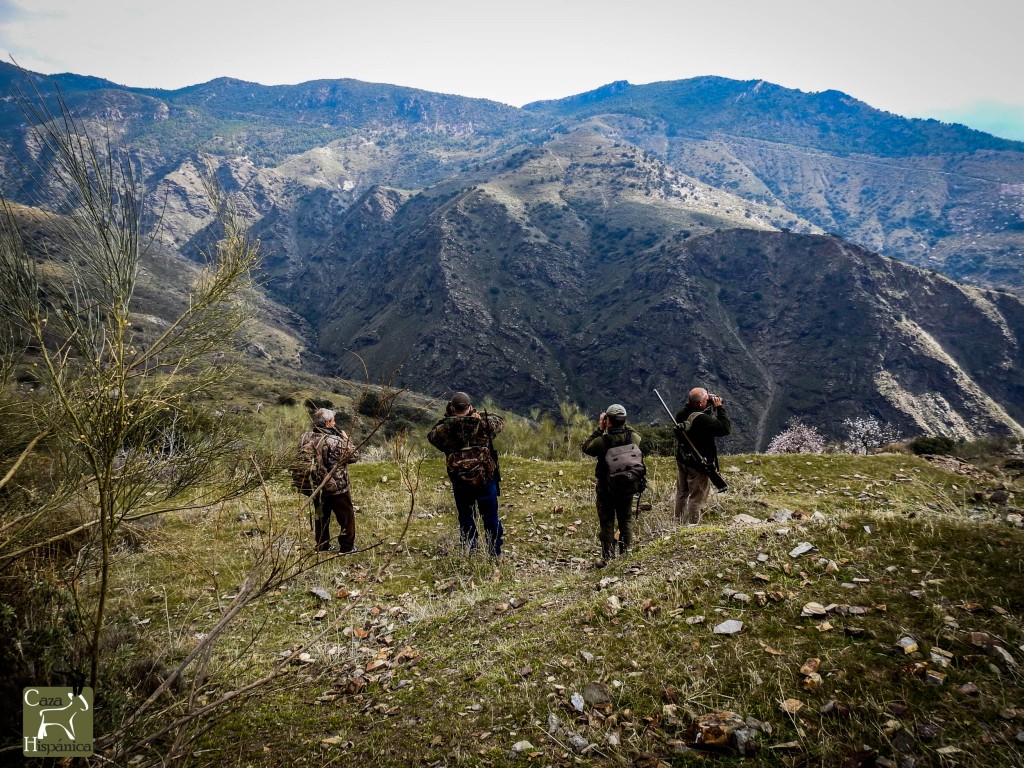 Comparing all the rams we saw that day we decided to go back to the slope below the road and harvest the biggest male bedded down in front of a rock wall. Joe anchored the rifle firmly on the hood of the 4×4 and aimed up shooting the ram with one bullet. 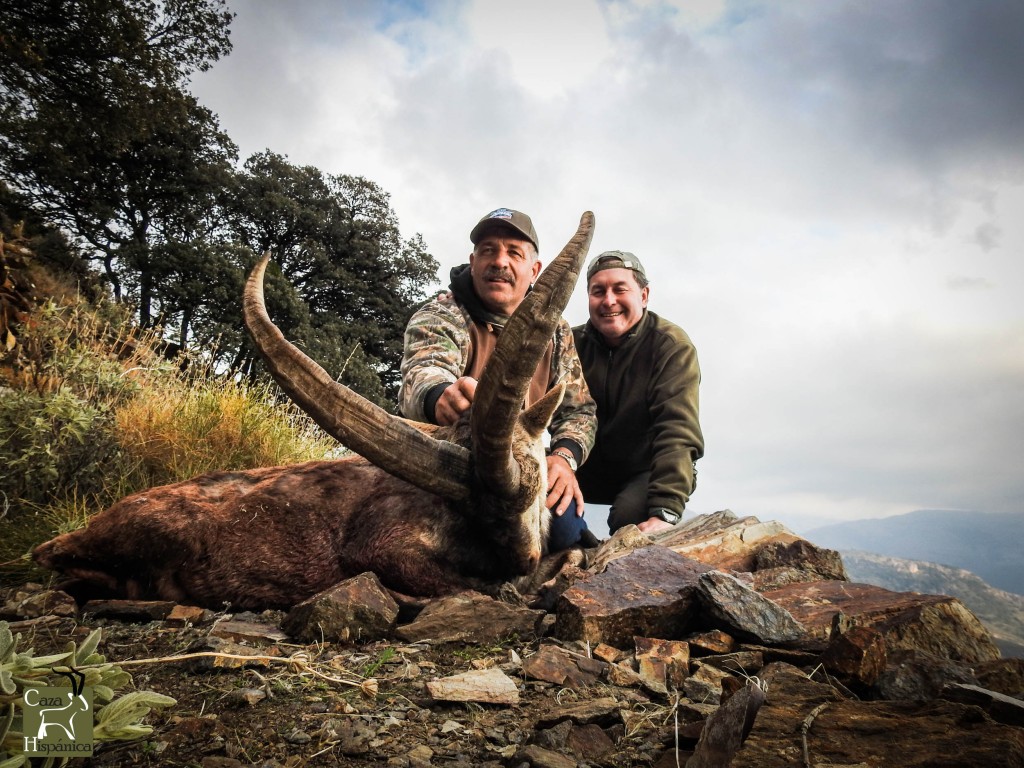 The silver medal Southeastern Ibex (CIC points) was the reward after all the patience the hunt involved that day on 7000 feet of Sierra Nevada closing the third chapter of the Spanish Ibex Grand Slam.

The last stop of the busy hunting/ touring itinerary was a 12th century town of Rubielos de Mora, voted the most beautiful town in Spain in 2016. 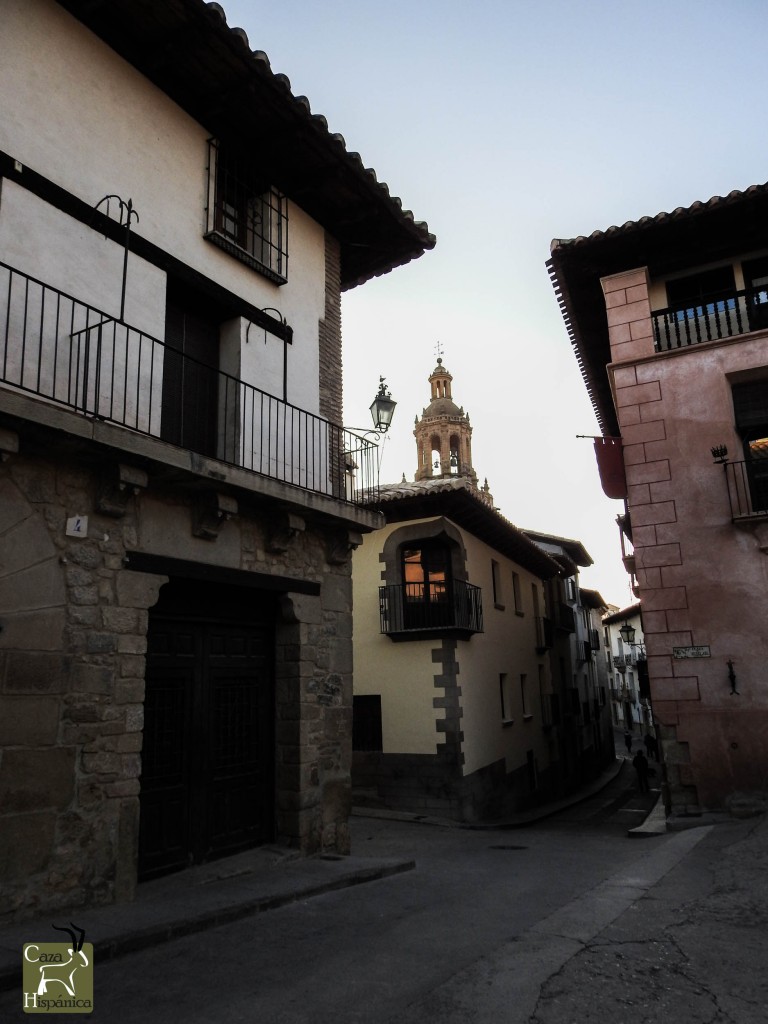 Waking up shortly after six we had a good breakfast and headed from the hotel to the hunting area. Again, an Ibex crossed our way, probably attracted by the salt the locals use in order to secure the roads for the winter snowfall. We were very lucky that day with blue skies above us, just a day before a major blizzard in that area. Later in the field we were to wait for the opportunity to spot Ibex and in the end we separated, and as Joe and Vicente were carefully coming down along the sunny side of a steep slope, the guide who was located on the other mountainside, was directing them towards a magnificent ibex feeding alone on the same slope. 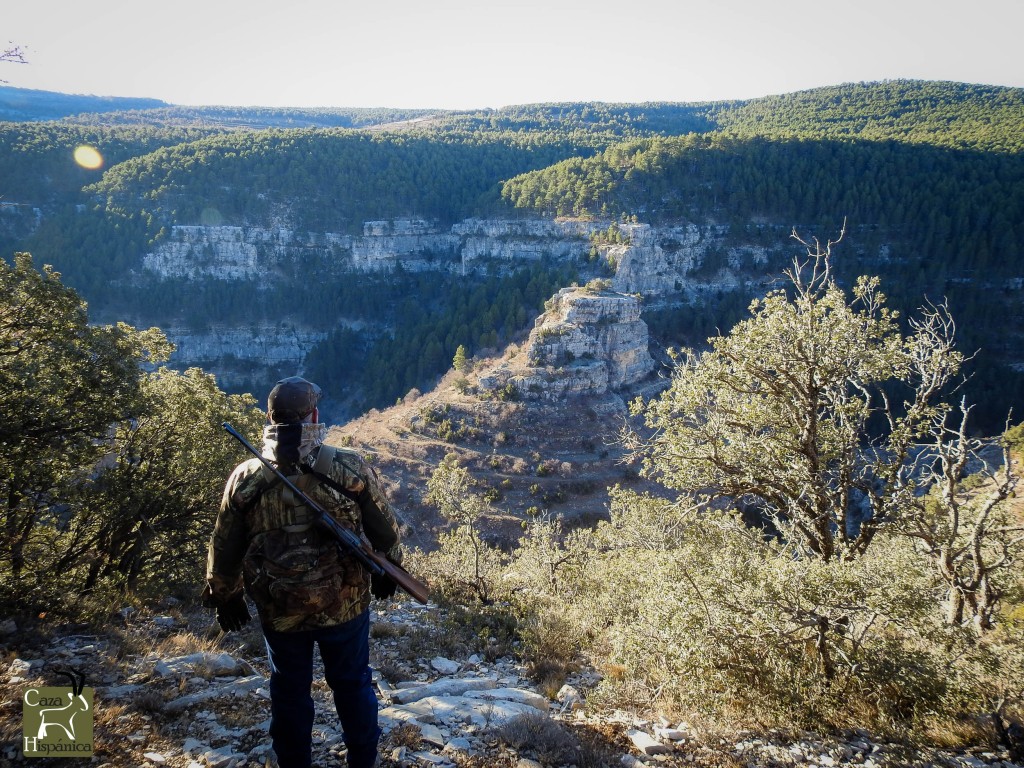 All of a sudden, we saw the Beceite Ibex from less than 100 miles unconscious of our presence, standing on its rear legs with a head up in the bush. Joe kept on impersonating that hilarious position after he realized his high silver Beceite Ibex, at the same time closing his memorable adventure in Spain with Caza Hispánica. 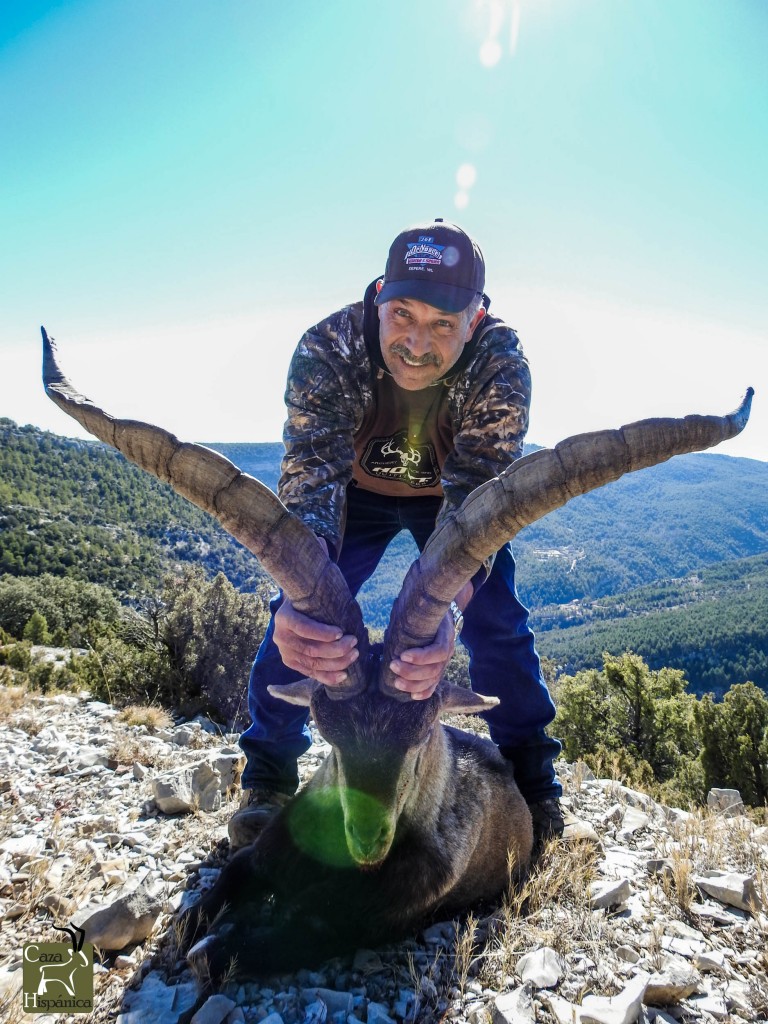